Who Moved My Cheese… Again?

Getting Responsive In Our Multiscreen Learning Design Efforts

If you have been following the Web design community, you would likely be very familiar with a term called “responsive Web design,” sometimes abbreviated as RWD. 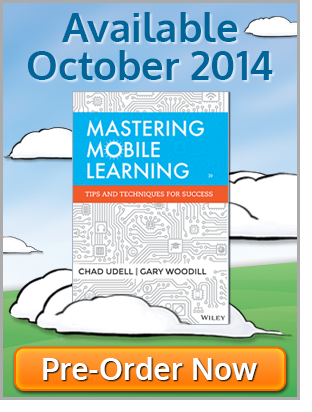 The term “responsive Web design” was coined in 2011 by A List Apart blogger, Ethan Marcotte, in his landmark post, Responsive Web Design (of course). This technique is both a design technique and a development tactic aimed at streamlining content production, graphic design work, and overall Web development workload.

This technique seems to have caught almost everybody in the eLearning industry off-guard. While we were largely concerned with the “When will Apple support Flash on iPad?” argument, someone moved the cheese. Surprise: it was our audience that moved it. They decided that battles over plugins weren’t anything they needed to be involved in and just started using content that worked on their devices. All of them. We gnashed our teeth and really had a hard time with it. Now that the world has seemingly moved on, it’s time for us in the learning industry to get over it and get back to creating for them.

This month’s newsletter will help show you how to get started with responsive design, but more importantly, why we should be thinking about it, and why learning the underlying technologies and standards behind any toolkit will take you far.

The control which designers know in the print medium, and often desire in the web medium, is simply a function of the limitation of the printed page. We should embrace the fact that the web doesn’t have the same constraints, and design for this flexibility. But first, we must ‘accept the ebb and flow of things.’

The mechanics of it are deceptively simple. It really hinges around a CSS3 technique (commonly lumped in with HTML5), “CSS media queries.” These media queries look a bit like this (Pardon our CSS geekery here. It will be over soon, so don’t go anywhere):

Those queries were taken from here. In the query depicted, devices with a maximum screen width of 480px or less will have the styles following the declaration applied to the content in the browser viewport.

Pretty simple, really. The basic gist is that you create a “query” that, given a particular, the Web browser’s capabilities and specifications, renders the according to styling information to ensure the site looks and *hopefully* behaves properly.

Beyond the implementation of the technique, though, there are some things that you should consider as you assess what it means for us in the learning industry.

This missive isn’t meant to be all doom and gloom. A number of people in the industry are starting to get it and do the right thing. Obviously, Float has been producing multiscreen and mobile learning from our very beginning. Our Tappestry work is a great example of that (It uses responsive design and a Web service layer to power apps and Web browsers alike). However, a few others are also contributing. Producing valuable content isn’t easy, regardless of what camp you fall in, but Kineo’s framework, Adapt, looks promising. Cammy Bean has blogged on the topic here. You can also check out some slides from them here. Additionally, Illumen Group seems to be doing some good work here, as well.

In addition to private industry taking note, it’s clear that the government is listening, as well. Significant moves have been made to ensure that Web properties are moving to responsive design. With the U.S. Departments of Defense, Energy, Education, and more being such huge consumers of training, won’t that eventually require our learning information to be responsive, as well?

Regardless of the initial uptake and response, it’s clear that something has to change. No longer can we go on creating content for a proprietary or non-scalable plugin or renderer and consider it future-proof.

Get on the standards bandwagon, or you’ll be wondering who moved your cheese again the next time.

If you need help, feel free to schedule an introductory consulting session with someone from the Float team.

As your learners become mobile, you’ve realized you need to provide your eLearning content in new ways. Simply porting that content over to mobile is possible. However, in our experience, that approach is almost certainly doomed to failure. “The search for the eLearning-to-mLearning-conversion easy button is a fool’s errand,” Chad says in his book, Learning Everywhere.

Chad will be in Orlando at Learning Solutions later this month to present a session on how to repurpose your eLearning solutions for mobile without the easy button. Reserve the 10:45-11:45 a.m. time slot on your schedule for Thursday, March 14, to be a part of this great session.

Chad Udell is the Managing Partner, strategy and new product development, at Float. There he leads his design and development teams to successful outcomes and award-winning work via a strong background in both disciplines and a singular focus on quality. He has worked with industry-leading Fortune 500 companies and government agencies to design and develop experiences for 20 years. Chad is recognized as an expert in mobile design and development, and he speaks regularly at national and international events and conferences on related topics. Chad is author of Learning Everywhere: How Mobile Content Strategies Are Transforming Training and co-editor and chapter author, with Gary Woodill, of Mastering Mobile Learning: Tips and Techniques for Success. His newest book, Shock of the New, co-authored with Gary Woodill was released in April of 2019.

4 Responses to Who Moved My Cheese… Again?